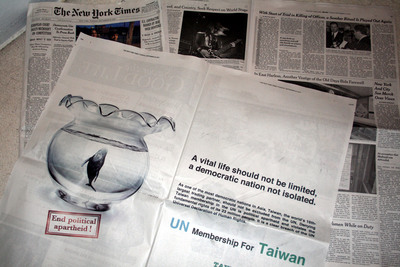 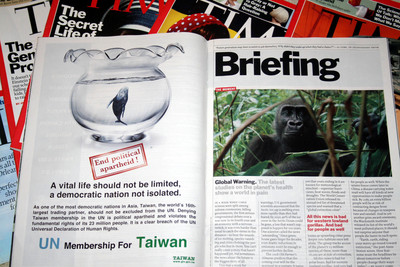 caption: End political apartheid;  sub-caption: A vital life should not be limited, a democratic nation not isolated.
ps: Taiwan thinks that political apartheid (like South Africa's old policy) will produce crisis, instead, participation in the U.N. is the solution.

(1) pic. above: Head of Taiwan Government Information Office shows his attitude by making a gesture.  He thinks people's will-power  is the key to join UN. (Taiwan vice-president thinks profound law knowledge is the key.)

★  (1)  Not a flashing & witty idea/design, HSBC had a similar advertisement (as below) before.  As for APARTHEID materials,  you can find a lot of various, clever political-cartoon ideas in world newspapers during 1985. ( black people's anti-apartheid protests in South Africa)

★ (2) Only one witty idea in this fused metaphor ad. : the shape of whale looks like that of Taiwan, however, the target audiences of the ads., Americans, as well as European people, cannot relish this.

★ (3) Advertisement can convey a brand personality ( a country's personality) of intelligence and wit ......, Taiwan needs to improve this part. ( to change western people's long-term view, Asian's design works are quite copied/simulated or cliche stuffs.   )

★ (1) opinion one : baseball-earth in hand, an old idea !!   The art world already got a lot "baseball- earth" designs by graphic fusion or substitution, etc.  For instance, political cartoons for the World Series's interrupted by earthquake in S.F,  or for environment issue in 1990.  You can also see statue art-work as below.

Taiwan usually focuses communications , regardless of (or unable to have) original creativity.  So, many of Taiwan's ads are modified or stale stuffs.

●  This web-site's exhibited art-works from 70+ nations, under the theme "Human Rights" and "No Dirty Politics"  already for about 10 years till present 2007.    The Asia & Pacific best-award news, the Straits Times, reported this event 3 times ( in heading page once).

●  This site insists :   A nation should protect all citizens.
Any Taiwanese human rights is hurt (internal) .....  , particularly on political purpose,  Taiwan government should admit immediately (with courage) and should be punished seriously for that !!

(1) <The United News>, <Apple Daily>,  <the China Times>:  Taiwan's Participation in the UN is a fake issue, on presidential-election winning purpose.