Although the grades are not quite good in some aspects (planning, system operation, etc), in here only focuses on cultural creativity that Taiwan is proud of .

(1)  Media gave good credits to the performance "Eating in Taipei" (Taiwanese-food-in-a-wok drama) in Deaflympics opening ceremony as well as Taiwanese cuisine party in closing ceremony.    These are so-called enhanced version of sports day in primary schools, because not world-class ideas  ―   players are simply moving around and playing slide  in a wok model (air).

Compare to a similar-look but smart/sharp witty outdoors ads-show overseas (TV news reports worldwide) ―   fresh shrimps struggling & jumping up and down in a hottest & huge iron wok   ――   actually, those shrimps are costumed players playing skateboarding game in the wok hills.

(2)  Taiwan always loves to present some unique cultural symbols, like Taiwan's god dolls/toys and the Electric-Techno Neon Gods ...., on all international stages (i.e., World Games 2009 Kaohsiung Taiwan, or MLB Dodgers stadium), but they are displayed in simple, low-class, tasteless way, nothing witty ideas  ―   like a heavy-slapstick.  (I feel it's as boring as gods show in Seoul Olympics show )

At most, those weirdo steps/dances completely different from traditional performance are exotic to international tourists, but won't really astonish or deeply impress anyone at all.

(5)  Too much marketing atmosphere ―  or even bit political ( China team absented in opening ceremony on purpose or for certain political reason : ROC President will make speech there ).

(6)  I feel some Taiwan's creativity team focuses on TV frame, not working too much for presenting audiences. 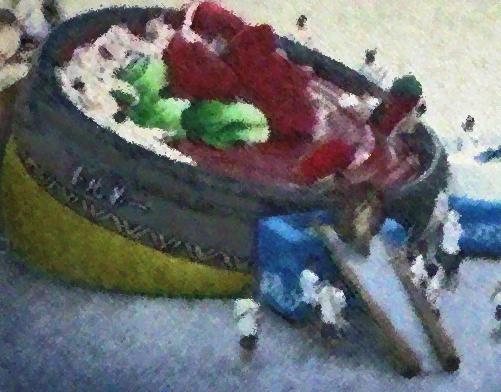 Below are sporting news concerning "a Taiwan's public-enemy referee in East Asian Games" which was happened soon after Taiwan's 2 world scaled games.

... Cheng was blamed by some Taiwan people for making a judgment unfavorable to Taiwan's athlete.

...  This incident reflects growing populism in Taiwan and gives us a chance for self-reflection. In recent years, discussions about public issues in Taiwan are usually dominated by emotional and subjective rhetoric due to a fundamental political divergence.

... We wonder if, in a civilized society, it is tolerable to use the verdict of public critics to punish a Taekwondo coach?

... We strongly believe that now is the time for local society to conduct a deep examination of its conceit and shallow culture.  (By Flor Wang)

ps pls. search by Google or Yahoo to read all details

KAOHSIUNG, Taiwan -- Tseng Ching-hsiang, the Taekwondo player who stirred controversy ...  the Hong Kong 2009 East Asian Games is in the center of media attention when he lost gold to the Korean opponent Jihoon Song - who allegedly struck Tseng's throat and caused Tseng to drop to the floor unconsciously during the game. Instead of calling a foul, the group of judges declared Song as the winner.

...  The Taiwanese judge, Chen Ta-wei, who did not call a foul for the reported attack but instead gave the final winning points to the Korean player, has apparently become a public enemy in Taiwan.

... Chen insisted that he had made a fair call according to the video footage which captured the hitting point at Tseng's headgear instead of on his throat.

... The Taiwanese committee on Taekwondo said...  will no longer be employing Chen as a judge. ...

... Zheng Dawei (Chinese name : 鄭大為), ... was one of the referees for a 72kg-level championship match where Taiwanese athlete Tseng Ching-hsiang (Chinese name: 曾敬翔) was scheduled to compete against a South Korean opponent. ...

Minister without Portfolio Ovid Tseng , ..., protested against what he saw as an unfair ruling as soon as the match was over.

...  Zheng said in a television interview that Ovid Tseng had no right to protest and may be seen as intending to cause riots. Because of the comment, the CTTA's disciplinary committee suspended Zheng from coaching taekwondo and refereeing for three years. The committee later decided to reinstate his right to be a referee, but his right to coach remained suspended.

...  local media as saying that the penalty was perceived as an outright challenge to the ATU's authority....

... The controversy began at the 2009 East Asian Games in Hong Kong, where Cheng ruled in favor of a South Korea taekwondo participant, even though he attacked Taiwan's participant, Tseng Chin-hsiang, in the throat, knocking him out.

Taiwan's Minister Without Portfolio Ovid Tseng, who attended the event, rebuked Cheng from the sidelines in an irate, emotional manner.

Cheng later criticized Tseng's action, saying it was tantamount to stirring a mutiny at the scene. His remarks deeply angered the CTTA, which subsequently suspended Cheng for three years. The ruling was upheld during a disciplinary meeting of the association on May 6.

... The Chinese Taipei Taekwondo Association’s (CTTA) disciplinary committee suspended Zheng from coaching and refereeing for three years following comments he made upon his return from the tournament.

...... Taiwan’s right to compete in international games could also be suspended because of the ruling, Lee said.

The letter, however, did not mention anything about suspending Taiwan’s right to participate in international competitions. The CTTA ruled last week to reinstate Zheng’s referee status, but upheld his three-year suspension from coaching.

For some of us, entering a vast sports stadium is always an anxious pleasure. Behind the electrifying anticipation of the game there’s the nagging feeling that every stadium contains the seeds of mass hysteria — that it can, in extreme times, become a place of terrifying intensity....

Designed by the Japanese architect Toyo Ito, the World Games’ main stadium, which will be unveiled at an opening ceremony here on Thursday, is shaped by a sensitivity to those conflicting sensations. ... It reflects his longstanding belief that architecture, to be human, must somehow embrace seemingly contradictory values. Instead of a self-contained utopia, he offers us multiple worlds, drifting in and out of focus like a dream.

Beijing, in Snub to Taipei, Boycotts a Sports Ceremony

...   mainland athletes were in Taiwan but that they did not register to take part in the opening ceremony.

Beijing sees Taiwan as part of its territory and protests any suggestion that the self-ruled island is a separate state. But the ceremony Thursday night was held in accordance with past practice at the Olympic Games and other international sporting events, under which Taiwan competes as “Chinese Taipei” and cannot fly its national flag.

Antonio Chiang, a media commentator and former government official, speculated that Beijing’s no-show may have been related to the appearance by President Ma Ying-jeou of Taiwan, who opened the World Games.

“It makes a very bad impression on Taiwan,” ...  it’s a mockery of Ma Ying-jeou’s policy.”

summary
(1) The opening ceremony (of World Games, Kaohsiung Taiwan) itself really reminds us of those performances in Beijing Olympic opening ceremony, in spite of the scale is lots smaller, some creative ideas are familiar to us ...

(2)  The appearance of President Ma Ying-jeou of Taiwan (who opened the World Games) resulted in China team's absence in opening ceremony.

( extract/excerpt from Chinese language report as below)

Deaflympics Taipei's promotion expense for 250 countries worldwide is only NT one million, but spend NT 250 million on domestic, so even our neighbors Korea and Japan had not heard that we are holding Deaflympics.