News:  ◆ NY Times, 2022-10-5:  the U.S. was intensifying efforts to build a giant stockpile of weapons in Taiwan, turning it into a “porcupine” bristling with armaments to discourage aggression from mainland China ◆ Forbes, 2022-10-3: Defense Secretary Austin: Chinese Invasion Of Taiwan Not 'Imminent'; “What we do see is China moving to establish what we would call a new normal". ◆ Chicago Tribune, 2022-9-23: if China needs to be confronted militarily (and that's unlikely), Taiwan is precisely the wrong place to try to do that ◆ CBS News,2022-9-18: Biden tells <60 Minutes> U.S. forces, U.S. men and women would defend Taiwan, but White House says this is not official U.S. policy ◆ Wall Street Journal,2022-9-19: China Is Capable of Blockading Taiwan, U.S. Navy Commander Says ◆ NY Times,2022-9-10: Drones started buzzing the islands off Taiwan-the latest front in China's mounting campaign of intimidation and psychological warfare  ◆ NY Times, 2022-9-4: Washington is increasingly wary that an emboldened China might invade Taiwan in the coming years. ◆ abc news, 2022-9-5: Taiwan's weaknesses on that front, chiefly in two areas: its reserves and civilian defense force.◆NY Times, 2022-8-29: Analysts debate how much protection China’s reliance on Taiwan gives it. Some argue that calculations over supply chains are insignificant in a decision over war ◆ NY Times, 2022-8-25: China could try to impose a blockade to force the island into concessions or as a precursor to wider military action  ◆ War on the Rocks, 2022-8-22: Some five to nine missiles  passed  over  Taiwan en route to targets east of the main island (in the early stages of the Fourth Taiwan Strait Crisis) ◆ NY Times, 2022-8-21: critics argued the tensions over Taiwan showed that Washington needed stronger military and economic strategies.   full text

◆ SCMP, 2022-8-21: PLA adopts nuclear deterrence to stop foreign intervention on Taiwan: analysts  ◆ SCMP, 2022-8-23: Beijing's sorties across the median line responded to Taiwan's "diplomatic salami" ; Taiwan was also inching away from the status quo with its history textbooks for schoolchildren downplaying a China-centric view of history on the island ◆  NY Times, 2022-8-11: Taiwan, which has struggled with accidents and morale in the face of such a would-be foe as China. By many accounts, Taiwan's forces are poorly equipped and understaffed ◆ Economist, 2022-8-10: Ms Pelosi's visit has allowed Beijing to move to a new level of military activity unchallenged, which will make it harder for America to defend Taiwan. ◆ Economist, 2022-8-11: America has changed,...it began to doubt that it was worth defending...there is little doubt that America would join a fight over Taiwan today...  Japan ...has indicated that it could intervene in a war...Taiwan must also show more willingness to defend itself ◆ Washington Post, 2022-8-11: Beijing is now focusing on taking the island by force, not through peaceful reunification ◆ Economist, 2022-8-11: US expert ...assessment is that China could keep Taiwan sealed off for many months, perhaps years, with devastating effect. ◆ Economist, 2022-8-10: Ms Pelosi's visit has allowed Beijing to move to a new level of military activity unchallenged, which will make it harder for America to defend Taiwan. ◆ BBC, 2022-8-9: Beijing firing missiles over Taiwan - have become "acceptable" - because they have happened, and Beijing has got away with it. this becomes the new standard  ◆ NY Times, 2022-8-8: China's drills near Taiwan is a sign that Beijing will keep up its military pressure on Taiwan, and could be normalizing its presence around the island before gradually cutting off access to its airspace and waters ◆ New York Times, 2022-8-7: After China's Military Spectacle, Options Narrow for Winning Over Taiwan◆ Reuters, 2022-8-7: The ability to enforce a blockade would give Beijing leverage to bring Taiwan to the negotiating table ;A former Chinese defence official :"Seeing how the U.S. and its allies responded to the drills, how confident can Taiwan leaders be in counting on them to come to the rescue should the PLA attack?"  ◆New York Times, 2022-8-2: China is preparing a hostile response of some sort...This is an exceptionally dangerous situation, perhaps more so than Ukraine  ◆ NY Times, 2022-7-28: The United States and China are on a collision course in the Taiwan Strait. China may soon be capable of seizing democratically ruled Taiwan — even in a fight with the United States. ◆ NY Times, 2022-7-25: Chinese leaders might try to move against the self-governing island over the next year and a half — perhaps by trying to cut off access to all or part of the Taiwan Strait  ◆ CNN,2022-7-25: Under Xi, a rising wave of nationalism has swept China, and support for "reuniting" with Taiwan — possibly by force — is running high ◆ Washington Post, 2022-7-23: Many Asian leaders have voiced fears that Russia’s effort to take over Ukraine could embolden China to move aggressively into Taiwan ◆ le Monde (France), 2022-7-21: China appears determined on using force in Taiwan ◆ DW (Germany),2022-7-22: Japan defense report warns Russia's invasion of Ukraine could encourage China to act against Taiwan ◆  Business Insider, 2022-7-21: CIA chief: the Ukraine war likely won't shake China's resolve to invade Taiwan

◆ FoxNews, 2022-7-20: CIA director 'wouldn't rule out' near-term Taiwan invasion ◆  Asia Nikkei (Japan), 2022-7-20:  Taiwan's ex-defense chief calls for sweeping military reforms ◆ FoxNews, 2022-7-7: Chinese diplomat says 'reunification' with Taiwan near ◆ Washington Post, 2022-7-3:  these steps (asymmetric warfare) may not be enough to repel a far more powerful opponent like China. Taiwan's mandatory military service ... spend more time doing menial labor than learning combat skills. Tactics taught are comparable to those (Gulf War or the Vietnam War) ◆ N.Y. Times, 2022-6-19: A Looming Threat /  ...Taiwan politicians have electoral considerations. Extending military conscription, for example, would probably not be very popular ◆ New York Times, 2022-6-13: Taiwan's defenses are, by many accounts, ill-equipped and understaffed...Should China invade, Taiwan's defenses will almost certainly crumble unless the United States and its allies help.  ◆ AFP, France24, 2022-6-10: China will 'not hesitate to start war' if Taiwan declares independence, Beijing says ◆ NY Times, 2022-6-10: American officials ... worry that China's leader, Xi Jinping, may be willing to go to war over Taiwan in the coming years. ◆ CNN, 2022-6-1: China has the power to take Taiwan, but it would cost an extremely bloody price ...China is more likely to emulate the "shock and awe" bombardments that preceded the US' invasions of Iraq.  ◆ for full text, pls. click cyber-link

◆ Daily Express (UK), 2022-5-30: Putin is winning his war, China Taiwan is next and that will be so much deadlier  ◆  New York Times, 2022-5-27: A 2018 congressionally-mandated assessment warned that America could face a “decisive military defeat” in a war over Taiwan ◆ NY Times, 2022-5-24: the US is trying to walk a fine line between deterrence and provocation... risk pushing President Xi Jinping of China to order an attack on Taiwan ◆ NY Times, 2022-5-24: Former presidents have hinted that the United States would fight for Taiwan but have otherwise remained studiedly vague...Taiwan's defense budget... remains scandalously low  ◆ New York Times, 2022-5-23: Biden Says U.S. Military Would Defend Taiwan if China Invaded, dispensing with the “strategic ambiguity” traditionally favored by American presidents ◆ New York Times, 2022-5-7: US presses Taiwan to buy missiles and smaller arms for asymmetric warfare (Suited to Win Against China);  But some Taiwanese defense officials are resistant. ◆Wall Street Journal, 2022-5-4: Since the Chinese economy is 10 times as large as the Russian economy, effective sanctions would be virtually impossible to enforce. Taiwan's lack of preparedness is increasingly dangerous. ◆ Washington Post, 2022-5-4:  China won't repeat Putin's Ukraine mistakes in Taiwan. ◆ Economist, 2022-4-20: the main lesson that China will draw from Ukraine is the need for speed—ideally achieving victory within days; Taiwan can learn ...Fighting spirit and the right Western arms may stymie a powerful foe ◆  Japan Times, 2022-4-19: U.S. 'strategic ambiguity' over Taiwan must end! US policy of ambiguity toward Taiwan is now fostering instability in the Indo-Pacific region, by encouraging China to underestimate U.S. resolve...  ◆ Wall street Journal, 2022-4-18: Kyiv's successful use of internet to counter Moscow highlights Taiwan's reliance on undersea internet cables that China could cut ◆ Fox News, 2022-4-15: Senator Sasse wrote: Congress plays a foundational role in the interpretation of the Taiwan Relations Act...Chinese spokesman: some in the U.S. attempt to use Taiwan to contain China. ◆ Daily Mail (UK), 2022-4-10: China accelerates work on more than one HUNDRED missile silos that could house nuclear weapons capable of reaching U.S. soil -  to deter America from intervening in conflict over Taiwan ◆  FoxNews, 2022-4-4: "It's not if China moves into Taiwan, it's when" ◆ Wall street Journal, 2022-3-29: Moves under discussion in Taiwan are still far from the kind of major revamp that some experts in the U.S. and elsewhere say is needed to upgrade Taiwan's military ◆  New York Times, 2022-3-20: If Russia succeeds in overtaking Ukraine, it increases the danger for Taiwan.◆ TIME, 2022-3-18: most analysts say that the island would not be able to stop a full-scale invasion on its own—and Ukraine's situation has sparked debate over whether anyone would come to Taiwan's aid  ◆ Politico, 2022-3-14: Taiwan's military may be rightly criticized for its poorly coordinated forces, and its government has been hesitant to invest in its own defense...PLA would be more motivated than the Russian forces...China’s deep integration into the global economy and the leverage of Beijing's $1,068 billion in treasury bonds would make Western sanctions more painful to implement ◆ Economist, 2022-3-5:  Taiwanese seem too uninterested to fight to defend their land.  Taiwan's sloth in reforming its defence capabilities and strengthening its deterrence  ◆  Washington Post, 2022-3-4: Taiwan's leaders try to calm fears over Ukraine invasion, but citizens worry their island will be next ◆ Economist, 2022-2-26:  Parallels with Taiwan colour Asian views of the war in Ukraine - Some fear a Chinese invasion has become more likely  ◆ New York Times, 2022-2-23: With some seeing parallels to Ukraine, Taiwan steps up its defenses ◆  CNN, 2022-2-3: China's leaders may be watching Ukraine with an eye on Taiwan ◆ USA Today, Yahoo, 2022-2-10, "Chinese Taipei" , the label implies a link to China... younger people have said they feel increasingly distant culturally from the other side. ◆ Brookings, 2022-2-7: why is unification so unpopular in Taiwan? It's the PRC political system; A majority of our respondents — 56% — said Taiwanese culture was similar to Chinese culture.  72% rated China's government as at least somewhat unfriendly. ◆ SCMP, 2022-2-12: “China's theory of victory is that... punishment and intimidation would eventually inflict enough pain and psychological stress that Taiwan would capitulate to Beijing's rule,” ◆  Guardian, NPR, Foxnews, CNN, 2022-1-28: China's ambassador to US warns of possible military conflict over Taiwan ◆ Foreign Affairs, 2022-2-1: the United States is on track to lose a war over Taiwan. The US needs Battle Force 2025. ◆ New York Times, 2022-1-25: China could use economic coercion, cyberoperations and hybrid tactics to try to seize or harm Taiwan's semiconductor industry — Biden promised he would work to bring production of semiconductor chips back to the United States. ◆Washington Post, 2022-1-24: Defending Taiwan is a worthy goal. But are we ready for heavy casualties? it would be a grave mistake for the United States to promise to defend Taiwan without preparing its public — and its soldiers — for the tough fight they could face ◆ New York post, 2022-1-21: Rep. Michael McCaul predicts Chinese invasion of Taiwan after Winter Olympics ◆  New York times, 2022-1-19: China's Growing Menace Hardens Island's Identity...60+% identify as solely Taiwanese ◆ France24, NY Post, Daily Mail(UK), 2021-12-30: China warns US will pay 'unbearable price' for backing Taiwan     ◆ for full text, pls. click cyber-link 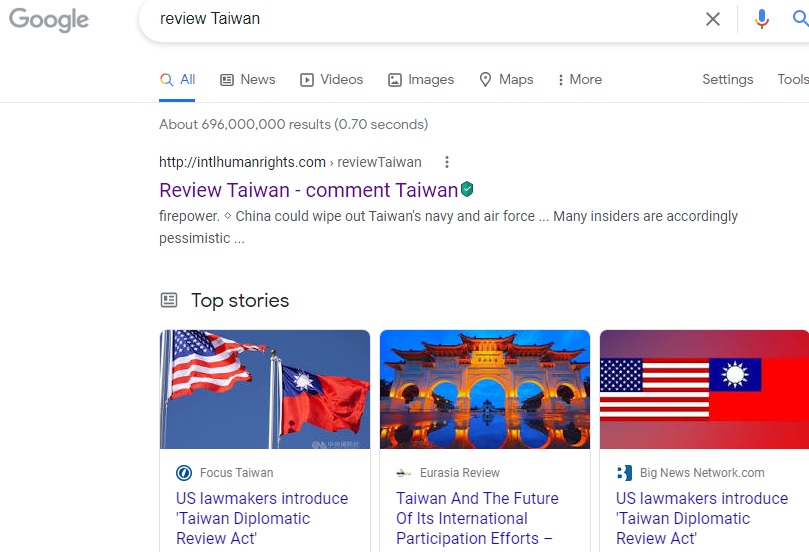 ◆ Nikkei Asia (Japan), 2021-9-10: Will Xi move on Taiwan? History warns he might ◆  Reuters, 2021-9-1 :Taiwan says China can 'paralyse' its defences, threat worsening ◆ VOA, 2021-8-28 : Survey: Most Americans Support Defending Taiwan if China Invades◆  Financial Times, 2021-8-23: Anti-Beijing sentiment is growing but the government has done little to prepare the public for war...The majority of Taiwanese do not believe there will be conflict with China...Taiwan is avoiding ‘the underlying reality...the Taiwanese public has no appetite for militarising society or even discussing defence. ◆ WSJ, 2021-8-23: Will America Fight to Save Taiwan? Will the Taiwanese?  ◆Politico, 2021-8-19:The fundamental challenge to the U.S. commitment to Taiwan is the growing tension between maintaining bilateral strategic stability with China and fighting China over Taiwan in a violent military conflict that has every potential to escalate into an all-out major power war